Workflow is a legacy feature for Chef Automate, which was designed for managing changes to both infrastructure and application code, giving your operations and development teams a common platform for developing, testing, and deploying cookbooks, applications, and more.

Workflow is available in Chef Automate for existing users. If you are not already using Workflow, but are interested in the solution it offers, please contact your sales or success representative for support with continuous integration pipelines.

A run-time dependency in Chef Automate is defined as an API-level dependency between two distinct pieces of software that occurs after both pieces have already compiled and started running. This type of dependency is distinct from compile-time dependencies, which should be handled through other means, such as local build verification tests and through the publish phase. Dependencies are tracked in Chef Automate because it is unsafe to deploy a project in an inter-dependent test environment if other related projects are failing.

To declare a dependency, update your project’s config.json file located in your local project folder at ./delivery/config.json. Once the configuration change reaches Union, dependencies will be visible on your source and dependent projects. When dependencies are defined for a project, an additional tab will appear listing those dependencies.

The projects who are declared as dependencies will also list which projects depend on them.

If neither the Dependencies or Required By tabs are visible, then that particular project is not part of a declared dependency graph.

The following example shows a run-time dependency against the master branch of a project named BackendAPI:

Dependencies impact two or more projects. Those projects have their own pipelines up through Acceptance, but when a project’s tests are run in the shared Union, Rehearsal, and Delivered pipeline for the organization, tests for all projects which depend on the currently-tested project will also run as part of the Union stage. This is to ensure that no cross-project bugs were introduced, such as a breaking API change. Also, you should still run smoke and functional tests on a project that depends on other project(s) during the Acceptance stage (because you know what those dependencies are). However, you may not know which projects depend on your project. Chef Automate uses the Union stage to runs tests against projects that depend on your project.

In this example, you can see that a change on the project Eegah is in Union, and Mitchell depends on Eegah. As a result, both Eegah and Mitchell’s tests are being run.

If any tests fail for either project, the entire Union run will fail and neither project will be automatically promoted. Additionally, if there’s another failed Union run before the first one fails which includes some of the same projects, then all the projects from both Union runs must pass their tests before anything can be promoted.

It is important to note that you may have a situation where some projects are entirely independent and have no dependencies on other projects. In this case, it does not matter what state those other projects are in. If their tests pass, Chef Automate will allow their changes to promote through.

As described above, dependency failures are breakages in your dependency graph, which keep the current project’s pipeline from being able to ship safely. You can see such failures as warnings on the change view in the Chef Automate server web UI. These failures are tracked because they allow Chef Automate to know which changes are safe to promote.

Assume we have some projects with the following dependencies:

Here it is represented graphically: 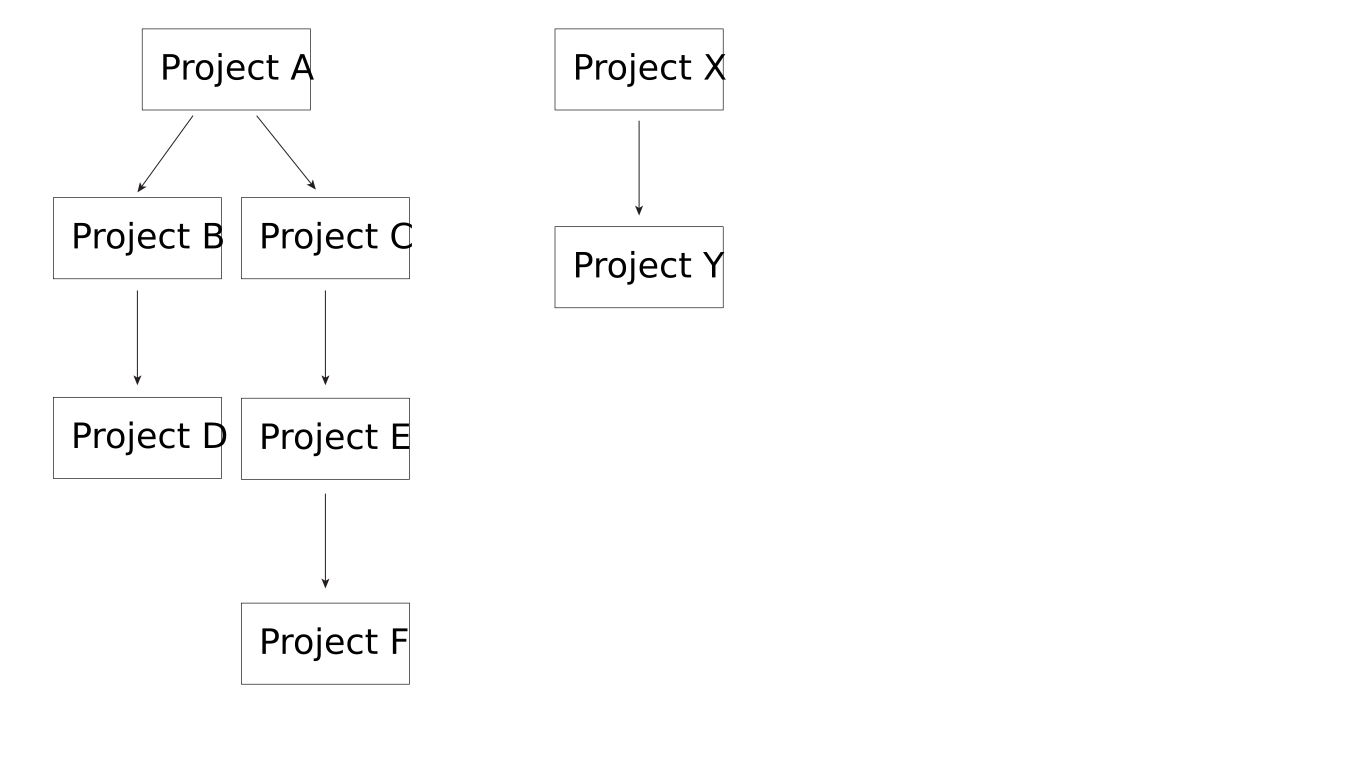 All the examples below are represented in graphical table form, where projects are denoted by uppercase letters and a test failure corresponding to a project is denoted by with a lowercase “x”. For example, Bx would represent a test failure in project B.

A change is made to project A, which causes an API incompatibility with project B, thus causing project B’s tests to fail. To fix the problem, another change is made to correct the API in project A and is resubmitted. This allows all tests to pass. Project A can now promote. Projects B and C do not need to promote because no changes have been made to them.

Again, a breaking change is made to project A. Before it can be fixed, someone from the other side of the company makes a change to X, which is an unrelated project. X and Y (which depends on X) pass their tests cleanly. Project X promotes without issue.

In a very similar example, a change can still ship if it is related to a breakage as long as that breakage does not occur in an immediate upstream dependency. Again, assume the same change is made to project A that broke project B. Then, a change is made to project E that passes its project tests. A project with changes can only impact projects that consume it, so project E is safe to promote although its dependency project C is blocked due to project C’s dependency on project A. This promotion of project E’s change can happen because the version of project C in Union and Rehearsal is still what it was before the change to project A was pushed through the pipeline and broke project B’s run-time tests in Union.

The same broken change is made to project A, which causes project B’s tests to fail. This time, instead of changing project A, project B is updated instead to use the new API. That worked, but the change in project B inadvertently broke project D during testing. Now, none of projects A through D can ship. It might look like project A should be able to ship as it isn’t broken, and neither are the projects which depend on it; however, to ship this version of project A, a new version of project B would have to ship, which would cause project D to break in production.

The end result is all projects are kept from promotion until project D is fixed, at which point everything can ship.

So far the examples have shown cases where there is a single set of blocked projects. Sometimes it makes sense to have blockages clear independently.

For example, that breaking change to project A got merged and broke project B again. Then, a bad change to project X was merged, which caused project X to fail. If project B is updated to address the breaking change from project A, one would expect projects A, B, and C to be able to ship, while X and Y would still be blocked. Because those project sets are not part of the same dependency graph, that is exactly what happens.

This final example describes how disjointed and broken project sets may merge when a new test set introduces overlap. It is similar to the previous one, but instead of projects X and Y, which only have an isolated dependency between X and Y, projects F and E have some overlap with the project set (A, B, C) because project E is dependent on project C. Making a change to project E which breaks project F does not lump F and E with the existing blocked project set (A, B, C) since F is not a dependency of A, B or C.

A final change to fix project E will unblock itself and the projects A, C, and F.