This guide shows you how to perform important administrative operations. You will add members to Chef-managed v2 policies, delete a legacy policy, and write a Team Admin v2 policy that lets a Team Admin manage their users and teams.

After you have signed in to Chef Automate, select the Settings tab in the top navigation bar, and then select and locate the Policies section in the left navigation.

In this section, you can view all of your v2 policies. 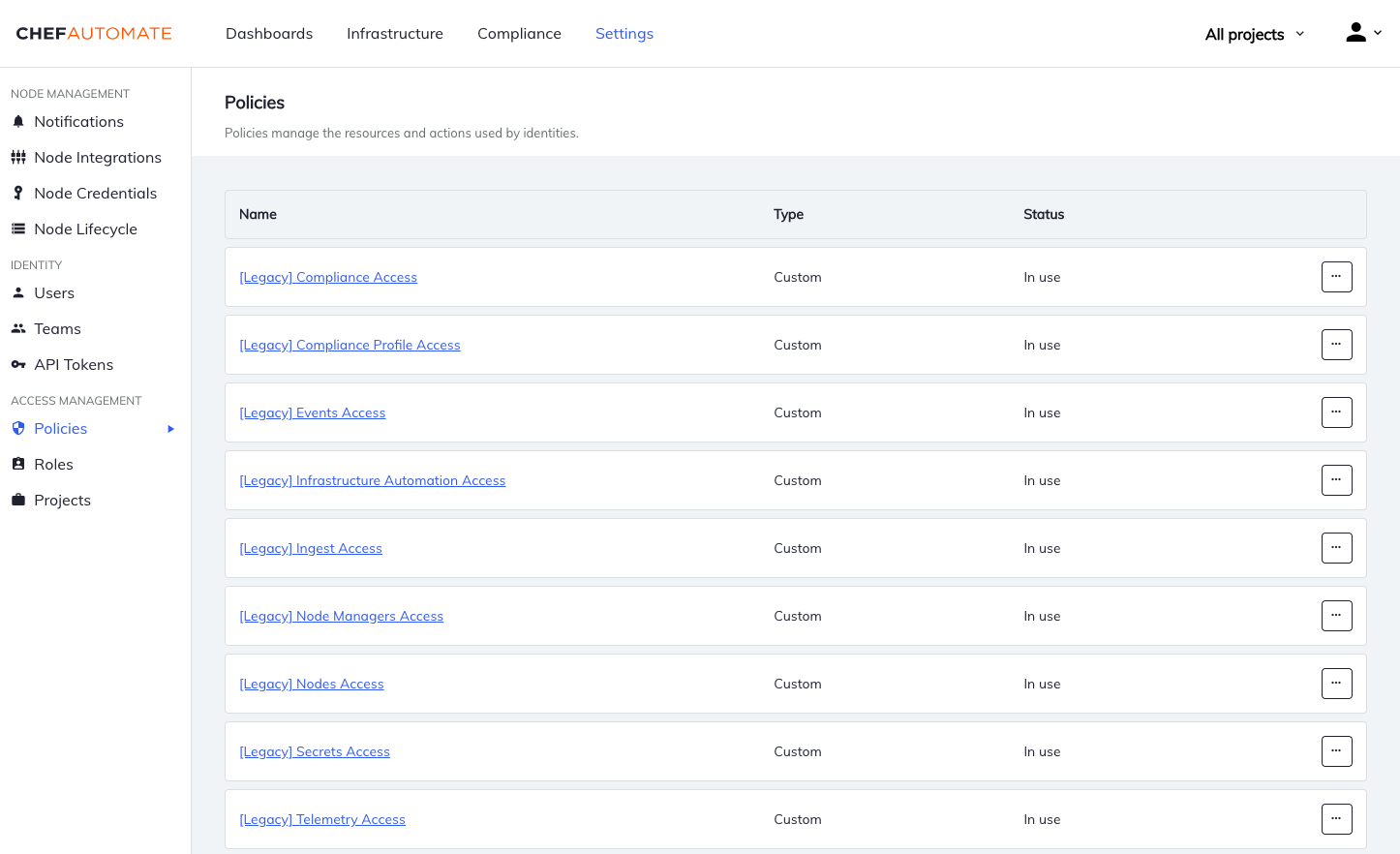 The next few sections explain how to use Chef-managed policies and how to create custom policies.

In this example conversion, you will create two local users and add them to default teams that are automatically included in default policies. Note that you could also add users directly to policies without the intermediate teams, but using teams can make managing your system more flexible.

Select Teams from the left navigation of the Settings tab. Three teams are provided by default: admins, viewers, and editors.

Follow the instructions for Adding Users to a Team to:

The Chef-managed policies give you a starting point for permissions. You may want to write more fine-grained policies, tailored to the demands of your organization. Defining your own policies must be done from the command line.

As an example, let us say that you, the admin, want to delegate a portion of your tasks to a colleague, but without granting them full admin access. In this case, you could create a policy called Team Devops Managers, which grants its members some–but not all–administrative privileges. Create a JSON file in the editor of your choice. Following JSON syntax, begin with the name property.

The name field is for human consumption. When you want to refer to the policy in commands, you will need to know the policy’s ID. Let us give this policy the ID value: team-managers-devops.

Additionally, we can permission actions on this policy just like any other IAM resource by assigning it to one or more projects. If we leave the projects array empty, then we indicate the policy is unassigned. For example, anyone with permission to view unassigned policies can view this policy.

Let us further assume you want user Bob as well as anyone on team gamma to be authorized by this policy. This grouping comprises the members array, as seen below.

Next, you will specify the permissions themselves–which in IAM v2 are the statements– declared as an array. The statement allows us to specify the actions a user is permitted to take upon resources that have been assigned to a project. The projects field on a statement is an array that may contain more than one existing project, a wildcard * to indicate permission to resources in any project, or (unassigned) to indicate permission to resources that have not been assigned to a project.

Note that the projects property in statements designates permission for the resources within the statement (here, that is iam:users and iam:teams), not for the policy itself, and cannot be left empty. For more about projects, see Projects in the IAM Guide documentation.

In this case, we only need a single statement providing access to the get, list, and update actions for users and teams that have been assigned to the project project-devops.

Save your JSON file and refer to the IAM Policies API reference to send that policy data to Chef Automate.

Users, teams, and API tokens can all be policy members. Both users and teams can be either locally or externally managed with LDAP or SAML.

Local users and teams are managed directly by Chef Automate.

To add or delete members, navigate to the Policies list in the Settings tab, and then select a policy in the list to open its details. Select Members to view the current membership. Use the Add Members button to open a list of candidate members. This lists all those local members (both users and teams) that are not members of this policy. If all of the local members are already included in the policy, then this list will be empty. Select any members you wish to add to the policy. Use the Add Members button to complete the operation. This takes you back to the policy details, showing the revised membership list.

Member expressions are required for externally managed users, and teams, as well as API tokens.

LDAP and SAML users' information is saved outside of Chef Automate. You will need to manually enter the provider-qualified user or team. To do this, open any policy from the Policies list, then select Members. Select Add Members to open the list of candidate local users and teams. Near the bottom of the page, select the Add Member Expression button.

The member expression dialog box appears after selecting Add Member Expression and guides you through creating a member expression. This dialog box ensures correct syntax use in a user-friendly way. The next few paragraphs explain the syntax if you want to add members via the API.

Alternately, you may add all teams to a policy using a wildcard as the last term in the member expression: team:ldap:* or team:saml:*.

Projects can be managed via the Projects list under the Settings tab and consist of an ID, a name, and a collection of ingest rules. Project ingest rules are lists of conditions used only when assigning ingested resources to projects, so they are not relevant when assigning IAM resources such as teams or roles.

By default, Chef Automate limits you to 300 projects. You can increase the project limit using the command line.

First, write the file with your new project limit:

Note: As a consequence of increasing the project limit, you may see slower loading times in the UI.

To create a project, navigate to the Projects list under the Settings tab and select Create Project. You will need to provide a name and can optionally edit the ID. You must create a project before you can assign any resources to it.

When you initiate the project creation, the system creates the project, but also three supplemental policies for your convenience:

These policies are discussed in more detail in Project Policies.

Assigning Teams and Tokens to Projects

Projects can be assigned to Automate-created teams or tokens on creation or update.

You may also assign teams and tokens to projects on creation. In the creation modal, select any projects to which the new resource should belong.

If you would like to delegate ownership of a project to another user so that they may assign resources, you will want to make that user a Project Owner of that project.

While Automate’s local teams and tokens can be directly assigned to a project, ingested resources must be assigned to projects using ingest rules.

Project ingest rules are used to associate ingested resources with projects within Automate. An ingest rule contains conditions that determine if an ingested resource should be moved into the rule’s project. Each condition contains an attribute, operator, and value. See IAM Project Rules API reference for details on how to manage project rules.

You may want to verify that those filters work as expected on the Event Feed, Client Runs, and Reports pages.

Select the Create Rule button to create a new project rule. Choose the resource type Node, then fill in the first condition’s fields. Feel free to create fake ingest data that corresponds to the example json below, or come up with a condition that matches your existing data set.

Compliance reports must be using audit cookbook 7.5+ in order to make use of all of the available project rule attributes. Older reports will only have Environment and Chef Role available as attributes.

Save the rule. If you later need to change the name or the conditions, select the project rule name on the project details page.

When edits are pending, a banner will be shown at the bottom of every page. Selecting the Update Projects button on that banner will apply those changes.

A percentage count appears in the bottom banner while the operation takes place. You may cancel the update at any time by selecting the Stop Project Update button in the banner and confirming the cancel in the modal that pops up.

Avoid stopping an update unless absolutely necessary. It will leave your system in an unknown state where only some resources have been moved into their projects while others still remain in old projects. Only another successful update will restore the system to an up-to-date state.

Once rules have been successfully applied, the banner will be dismissed until the next time there are pending edits to any project.

To verify that the ingested resources have been moved into the correct projects, select project-devops in the global projects filter, which is on the top navigation. The data in Automate filters by the selected project-devops project. In this example, the effect is revealed by navigating to the Compliance Reports' Nodes tab, which only features nodes that belong to the devops Chef Organization.

Now that we have the first set of our ingested data associated with our new project, let us add another condition and a new rule to add more data to project-devops.

Ingested events require conditions of Event type to be associated with the correct project. A condition of type Node will not match an event, even if the condition’s operator, attribute, and value all match exactly (and vice versa with Event project rules and nodes).

Return again to the project detail page and create two new ingest rules by selecting Create Rule. Creating new rules will expand the data set under project-devops, because an ingested resource need only match one rule to be placed in the project.

Adding conditions further restricts the ingested data because every condition must be true for an ingested resource to be placed in the project.

For the second rule, choose resource type Event. Fill in the first condition with attribute Chef Server, operator member of, and value devops.pizza, devops.dog, or any values matching your data set.

Setting the project rule Resource Type determines what condition attributes are available to select. Event rule conditions can only have the attributes Chef Organization or Chef Server.

Select the Update Projects button from the bottom banner. Upon completion of the update, you should be able to filter by project-devops across Automate’s dashboards and see only the ingested data that you expect.

To create a project that contains all Effortless Infra nodes, create a ingest rule with resource type Node and a condition that uses attribute Chef Server, operator equals, and value localhost.

If desired, create subgroups of Effortless Infra nodes by adding a second condition that matches a specific Chef Policy Name.

When you create a project, Chef Automate automatically creates three supplemental policies. This next table further describes the roles associated with these policies.

While we have safeguards to prevent it, it is possible to lock yourself out of Chef Automate. If you have root access to the node where Chef Automate is installed, use the following commands to restore admin access: