Create an Origin on Builder

You can join existing origins by invitation and you can create your own origins. For more on invitations, see origin membership and RBAC. 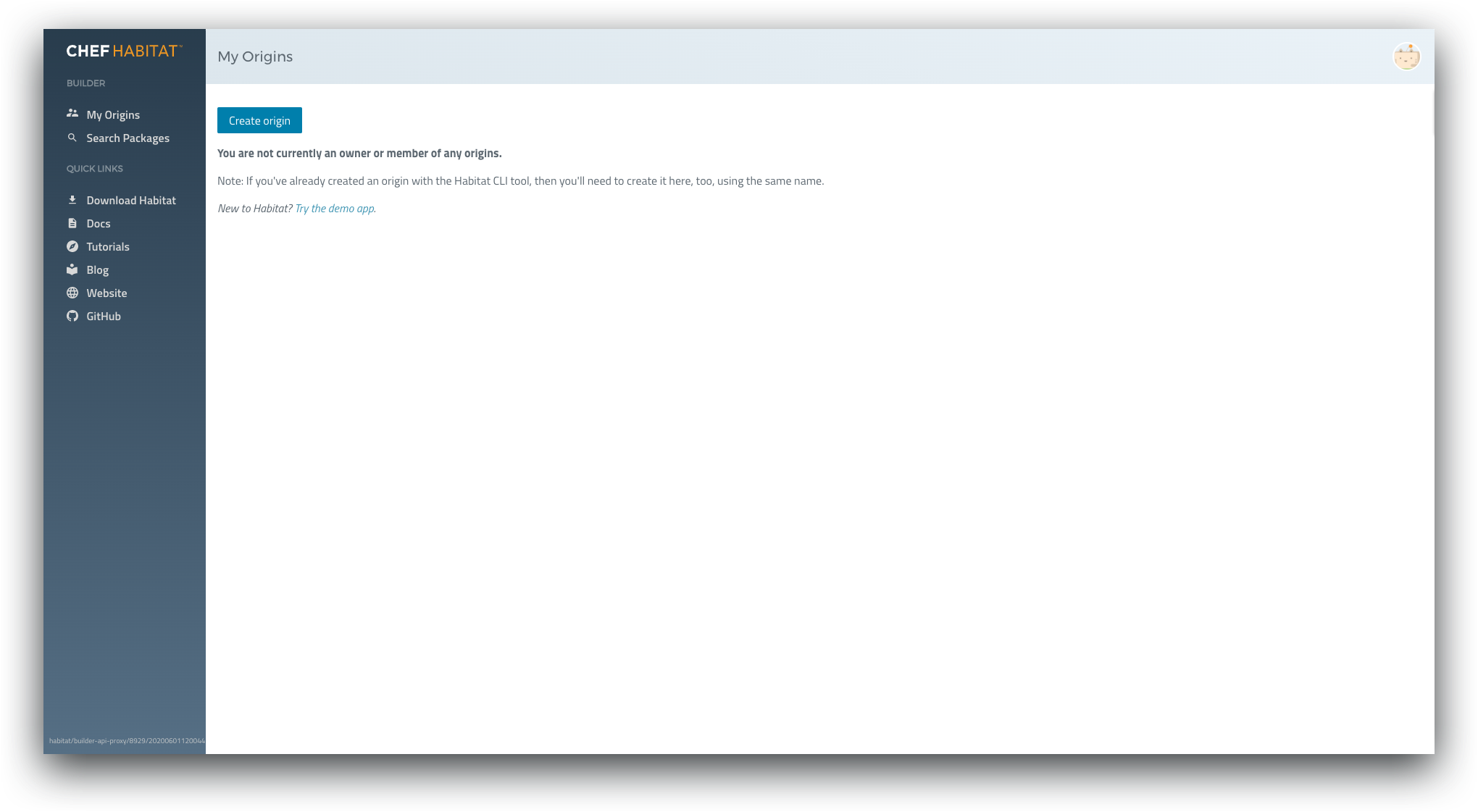 To create an origin, select the Create origin button on the My Origins page which opens the Create New Origin form. (Chef Habitat Builder > My Origins ) 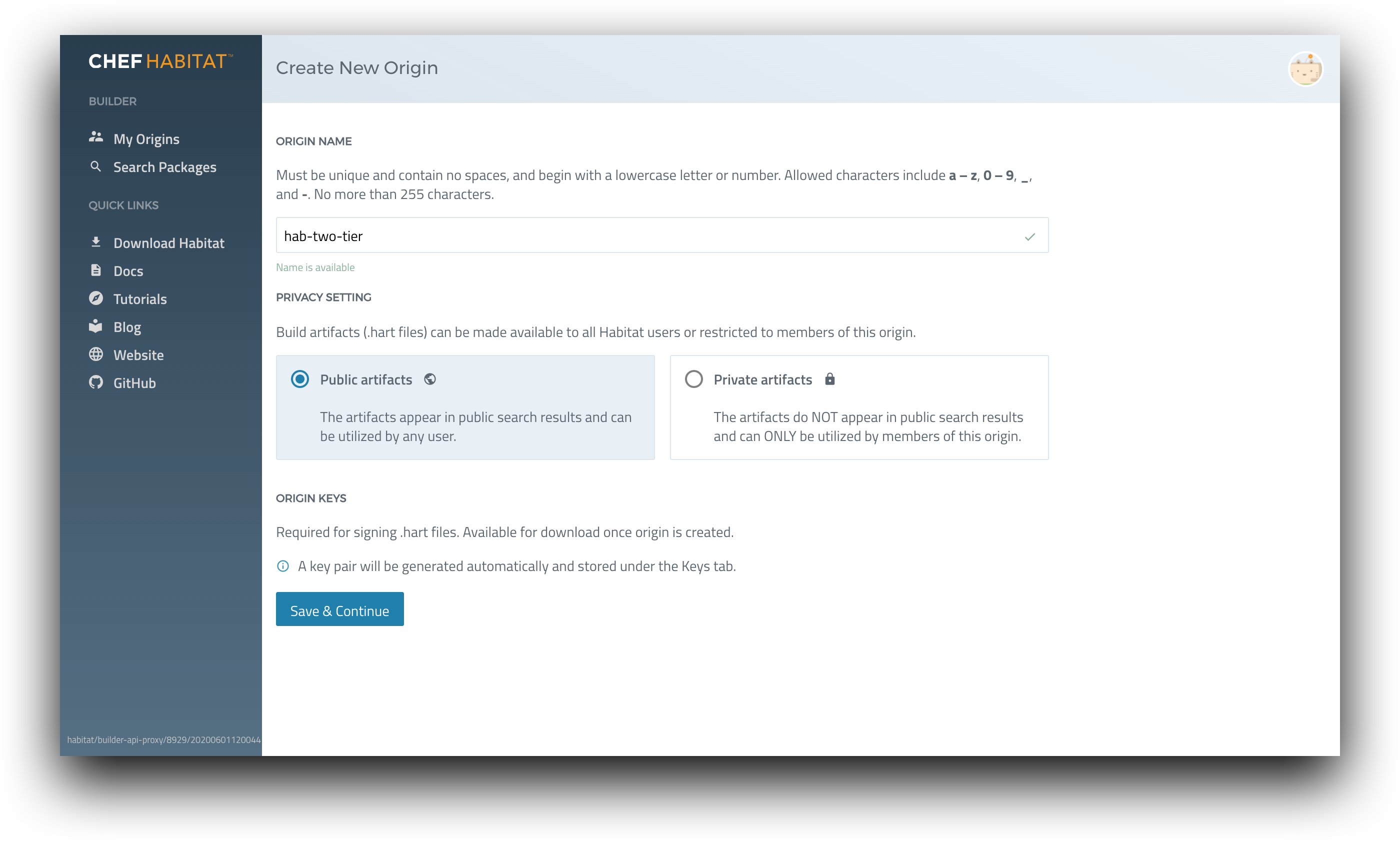 First, enter a unique name that you want to associate with your packages. Chef Habitat will only let you create an origin with a unique name. Some examples that you’ll see in Chef Habitat Builder are team names, user names, and abstract concepts.

Next, choose a privacy setting to set as the default for new packages. You can override this setting when uploading individual packages from the CLI or by connecting a plan file that declares a package as private. The difference between public and private packages is:

When you select Save and Continue, Chef Habitat Builder: 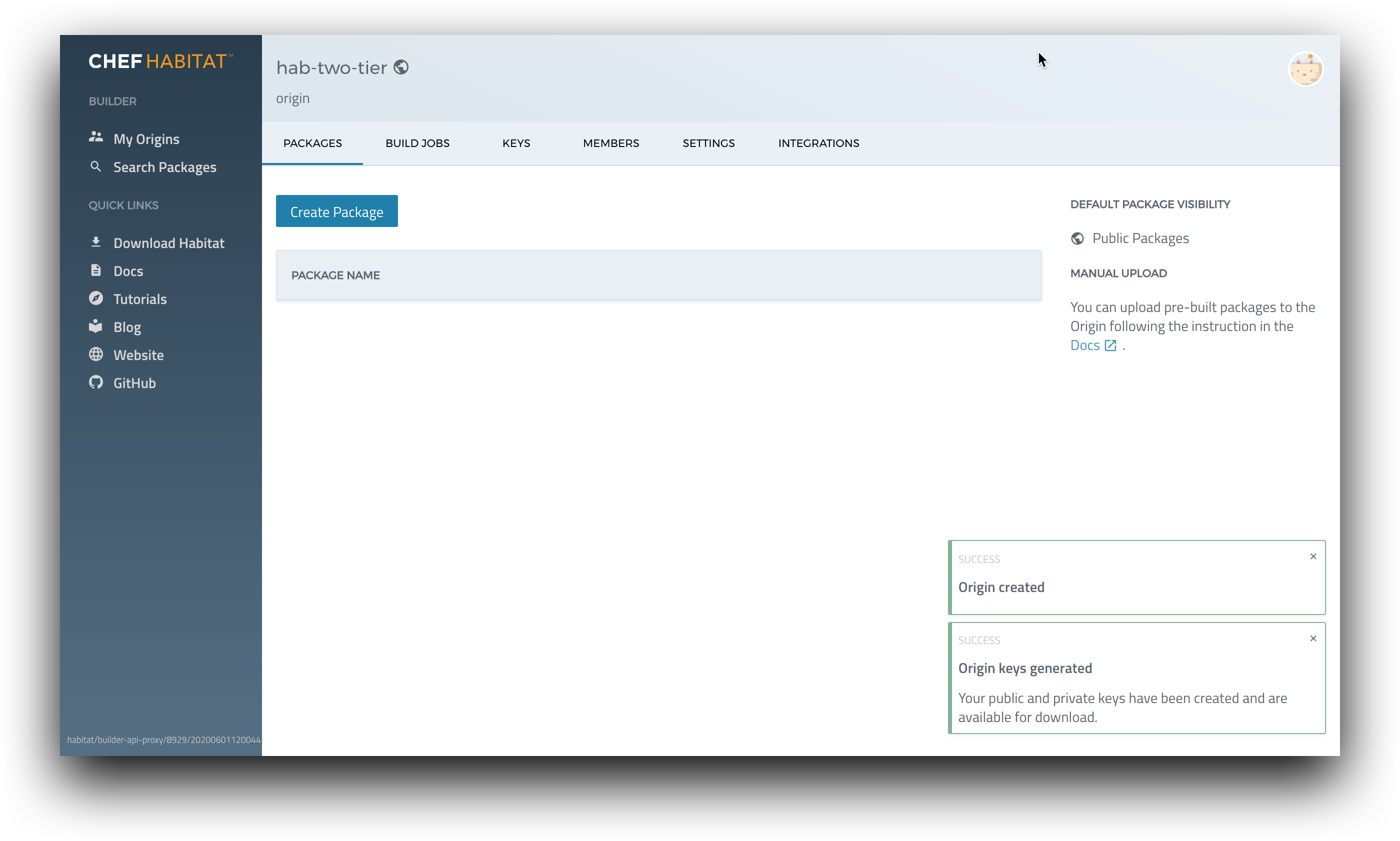 Create an Origin with the Chef Habitat CLI

Use the hab origin commands to manage your origins from the command line.

The results of this command differ slightly from creating an origin on the Chef Habitat Builder site. The CLI command:

RBAC provides your organization with better operational safety by letting you assign specific levels of access to each user that belongs to an origin. With RBAC in place, existing standard origin ‘members’ from earlier versions are assigned the ‘Maintainer’ role. This role has similar permissions of the previous generic ‘member’ role, and the areas of difference are detailed below. The origin owner role remains unchanged.

When you join or create an origin, Chef Habitat Builder identifies your personal access token and assigns it a membership role for that origin. Your membership role defines the level of access that you have to the resources in an origin. By default, you’re assigned the “read-only” role when you join an origin, and you’re assigned the ‘owner’ role when you create an origin.

In tandem with the changes to the Builder membership roles, we’ve also updated the hab CLI to support RBAC. We’re working on adding role management to the Chef Habitat Builder site, but in the meantime, you’ll need to use the CLI for now. 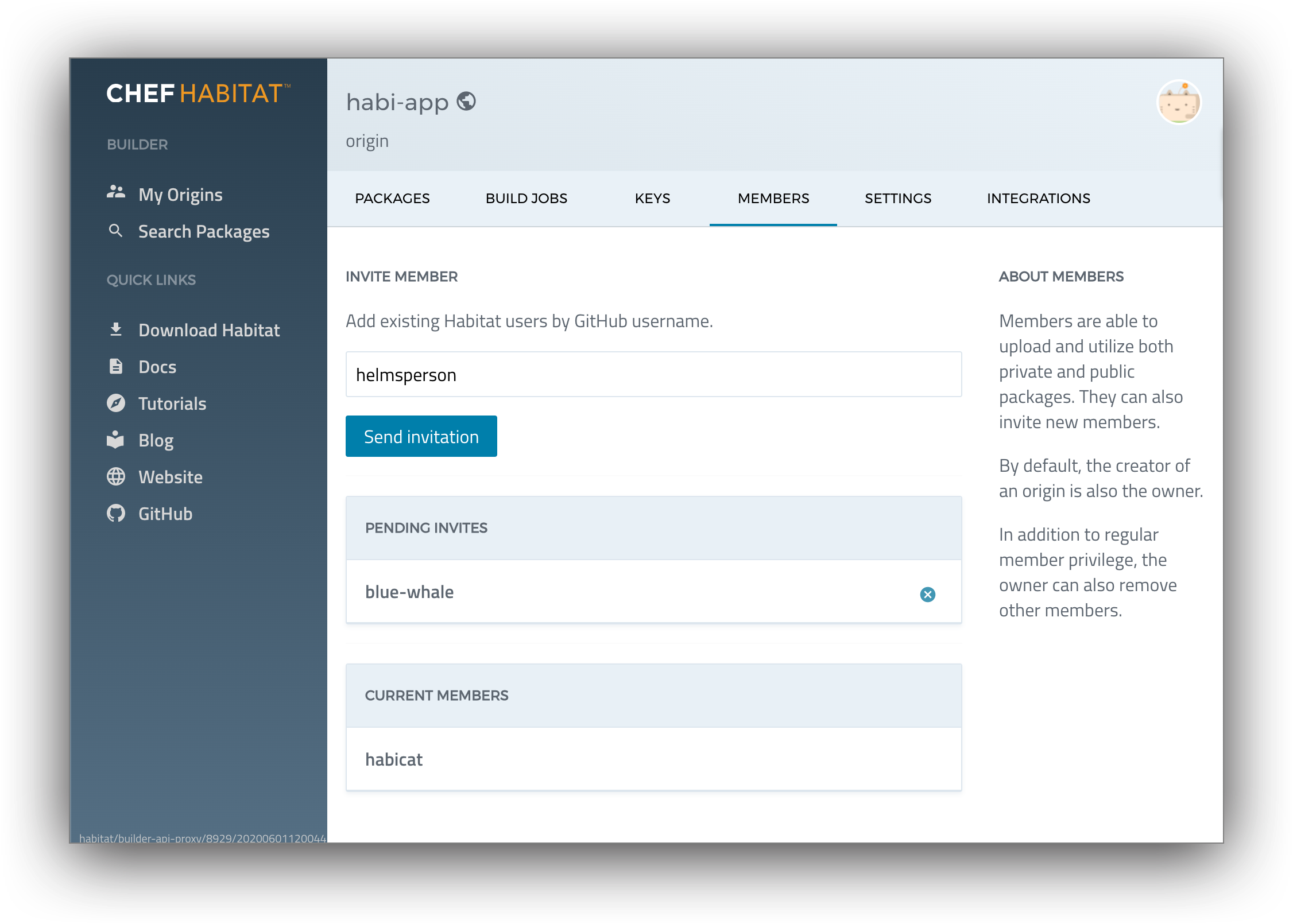 All Chef Habitat Builder users can accept, ignore, and see invitations for their accounts.

Origin administrators and owners can rescind an origin membership invitation:

You can use role based access control (RBAC) from the command line. An origin MEMBER_ACCOUNT is the name used to sign in to Chef Habitat builder. You can find the list of user names on an origin’s Members Tab. (Builder > Origin > Members)

The RBAC command syntax is:

The syntax for the show subcommand is:

The syntax for the set subcommand is:

When you create an origin, Chef Habitat Builder automatically generates an origin key pair and saves both keys. To view your origin keys on Chef Habitat Builder, navigate to your origin and select the Keys tab. (Builder > Origins > Keys) You will always be able to view and download origin public keys, but you will only see the private keys for origins in which you are an “administrator” or “owner”. 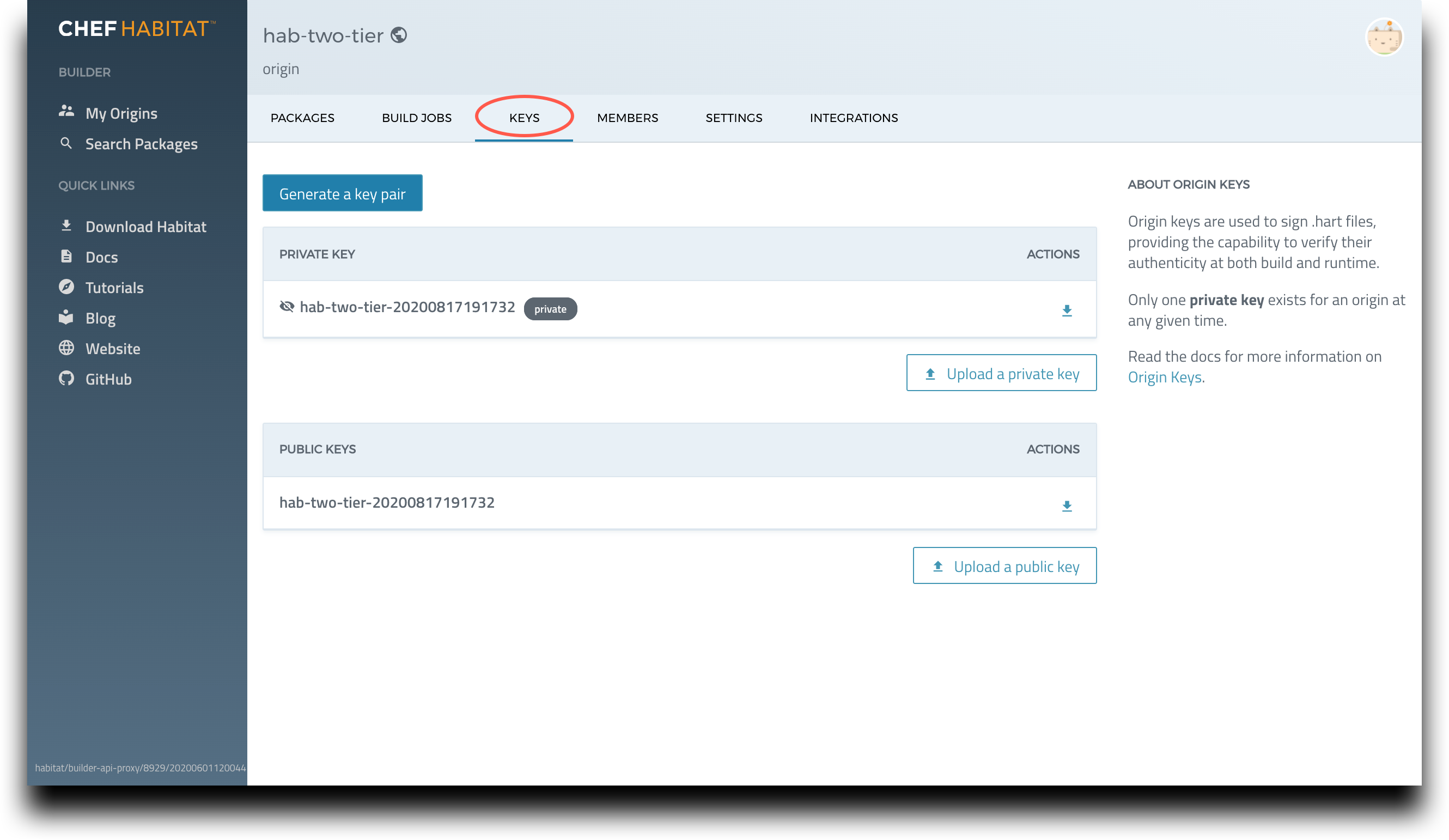 Download your private or public origin key by selecting the download icon from the right end of the key details, under the Actions heading.

You can upload origin keys that you generate on the command line to Chef Habitat Builder by selecting either the Upload a private key or Upload a public key icon, and copy your key into the form that appears. 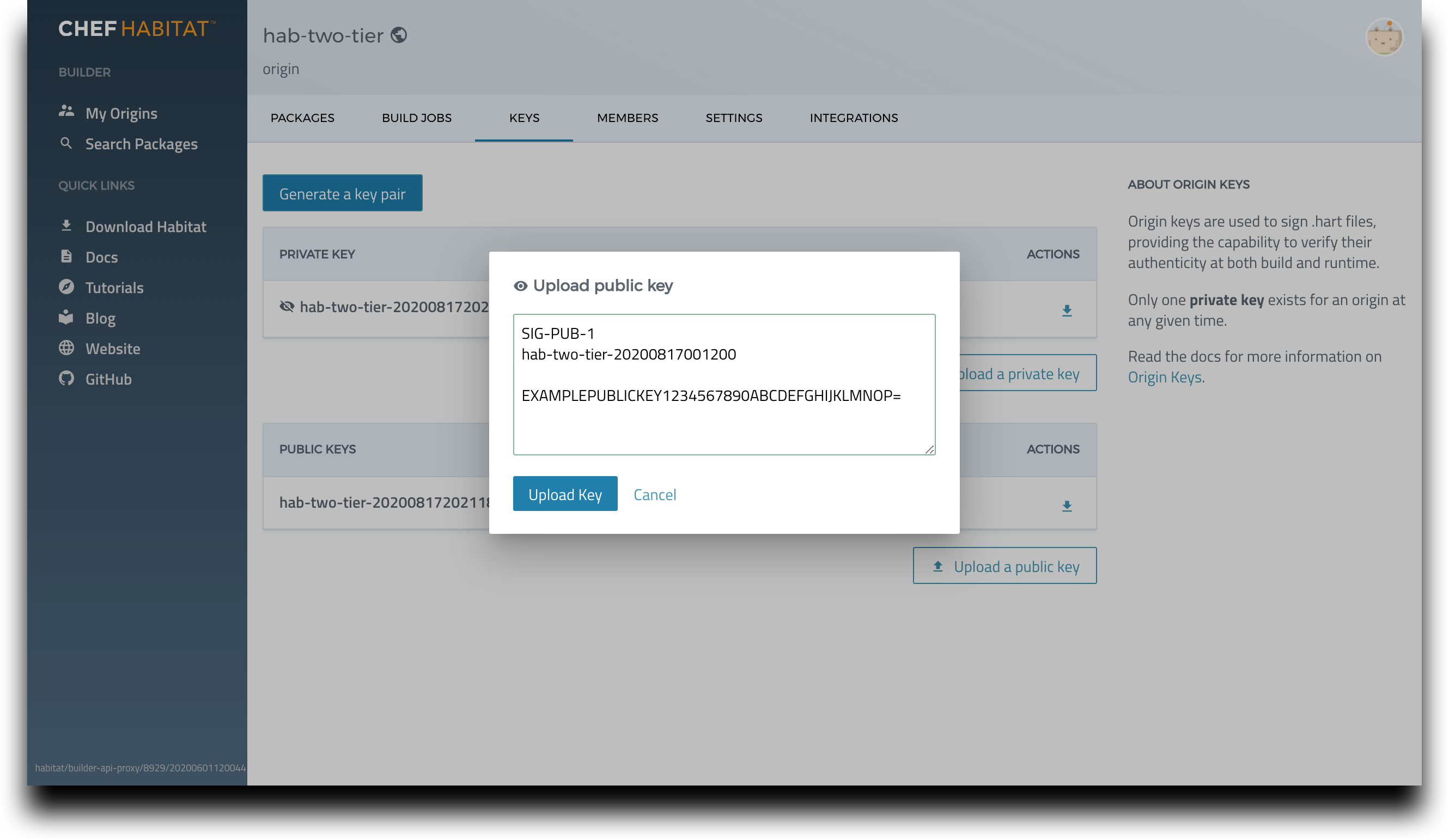 Managing Origin Keys with the CLI

See the CLI documentation for more information on the hab origin key commands.

To find your origin keys in your local environment:

On Linux or macOS:

To find your existing origin keys from inside of the Chef Habitat Studio:

On Linux or macOS:

Generate Origin Keys with the CLI

When you create an origin through the site, Chef Habitat Builder automatically generates an origin key pair.

To get your public origin key using the command line, use:

Upload Origin Keys with the CLI

Upload both origin keys at the same time:

Import Origin Keys with the CLI

Use hab origin key import to read the key from a standard input stream into Chef Habitat Builder:

On a macOS, you may encounter an upload failure. To remediate this failure:

Initialize the setting from the command line with:

Everyone with origin membership can see the Settings tab, but only origin administrators and owners can add, update, or delete settings content. 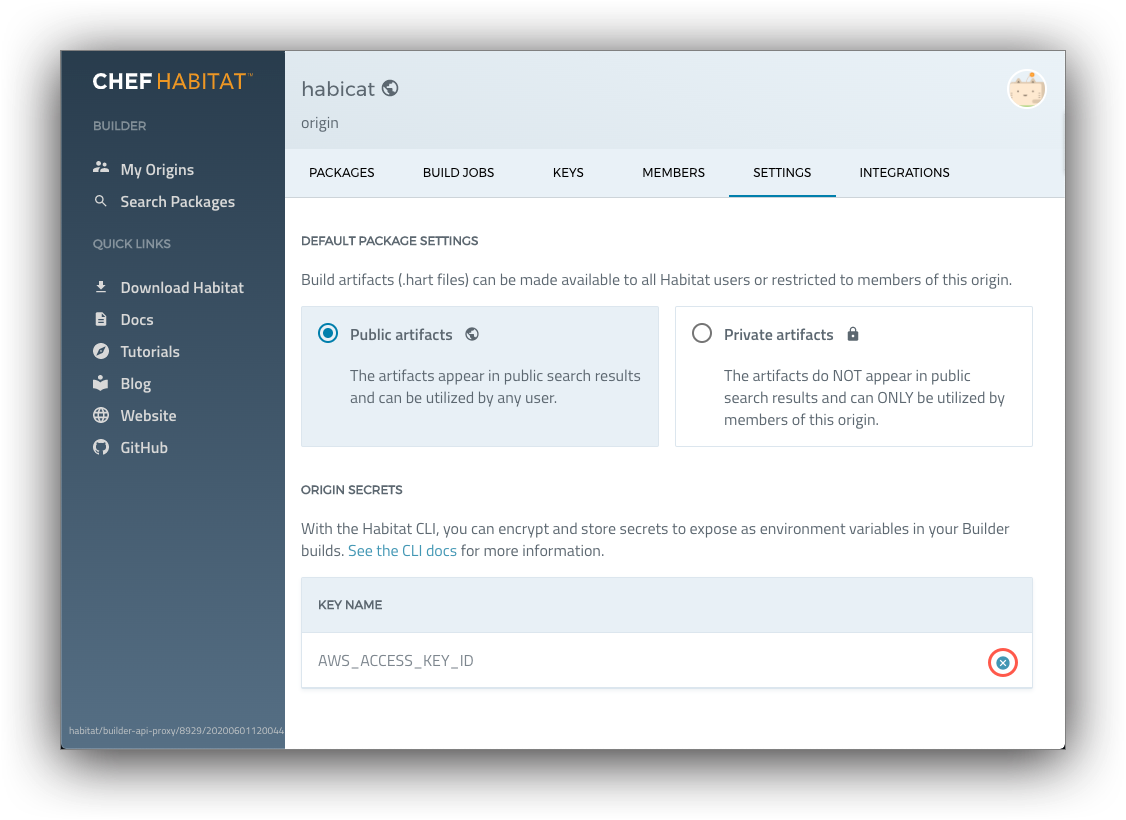 The Default Package Settings define the visibility of build artifacts (.hart files). Everyone with origin membership can view the origin settings, but only origin administrators and owners can add, update, or delete settings.

Change the default setting for the origin by switching from Public Packages to Private Packages. The default setting required for each origin and users with more than one origin can set some as public and others as private. Packages can have different default visibility settings than their origin’s. Change the default visibility setting in for individual packages in that package’s setting tab (Builder > Origin > Package > Settings).

Everyone with origin membership can view origin secrets, but only origin administrators and owners can add, update, or delete settings. Origin Secrets are located at the bottom of the Settings tab (Builder > Origin > Settings > Origin Secrets) and they let you encrypt and store secrets as environment variables. Origin secrets are useful for plans that require access to protected resources at build time, such as private source-code repositories and cloud storage providers.

To list all of the secrets in an origin, use:

Add your origin secrets as environment variables in your local environment:

Save an Origin Secret

To save an origin secret give the secret a name and the key value:

The output should similar to:

To delete an origin secret from an origin with the CLI

See the hab origin secret CLI documentation for more information on these commands.

Create an Origin on Builder

Create an Origin on Builder
×