Continuous deployment is a well-known software development practice of building and testing code changes in preparation for a release to a production environment.

Chef Habitat supports continuous deployment workflows through the use of channels. A channel is a tag for a package that the Supervisors in a service group can subscribe to. Channels are useful in CI/CD scenarios where you want to gate a package before making it the default version of the package that users should consume. You can think of this split as the difference between test and production, or nightly releases versus stable releases of products.

To promote your package to a channel, you must either use Builder to build your package or upload it to Builder yourself, and then use the hab pkg promote subcommand to promote the package to the intended channel. To combine operations, the hab CLI allows you to do both in one command by using the --channel option when uploading your package. The following shows how to upload and promote a package to a custom channel named test.

In the example above, if you look up your package in the Builder UI, or using the hab pkg channels subcommand, you can see that your package is tagged for both the test and unstable channels.

If you have already uploaded your package to a channel and wish to promote it to a different channel, use the hab pkg promote subcommand as shown below.

Combining an Update Strategy with Channels

By using both channels and either the at-once or rolling update strategies, you can automatically update packages in a given channel as shown below: 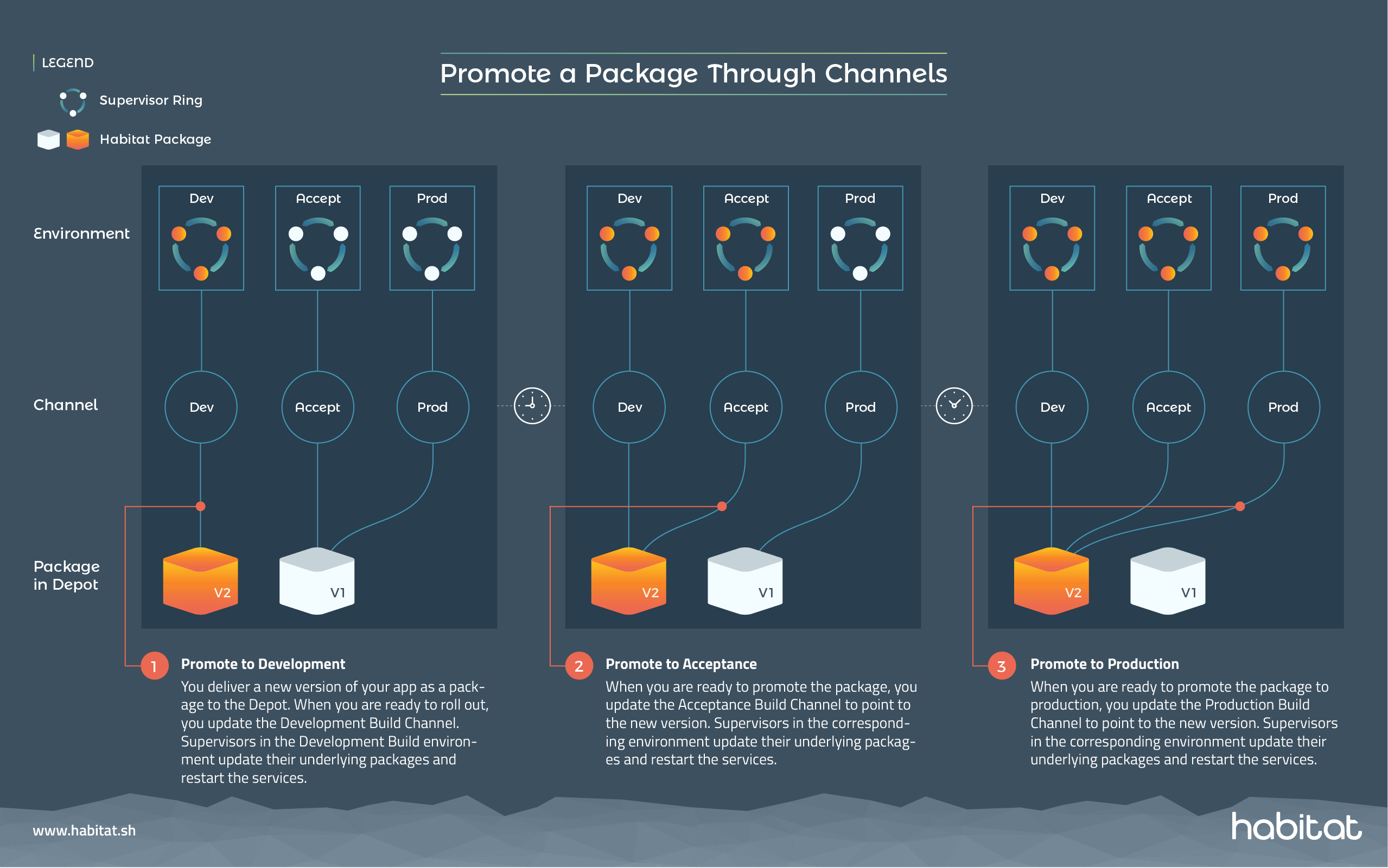 Using the infographic as a guide, a typical continuous deployment scenario would be as follows:

Configuring a Supervisor’s update strategy to point to a channel ensures that new versions of the application do not get deployed until the channel is updated, thereby preventing unstable versions from reaching environments for which they are not intended.

To start a service with an update strategy and pointing to a channel, specify them as options when loading the service.

While that service is running, update your package, rebuild it, and then promote it to the same channel that the previous release of that service is currently running in (e.g. test). Those running instances should now update according to their update strategy.

Demoting a Package from a Channel

If you need to un-associate a channel from a specific package release, you can do so using the hab pkg demote subcommand. Packages can be demoted from all channels except unstable.

The Builder UI for that package release and hab pkg channels will both reflect the removal of that channel.

Note If you demote a package from the stable channel, then any other packages that depend on the stable version of that package will either fail to load or build depending on how that demoted packaged was used.

Also, downgrading to another release for a specific channel is not available at this time. This means if you run the latest release of a package from a specific channel, and demote the channel for that release, the package will not downgrade to the next most recent release from that channel.