A recipe is the most fundamental configuration element within the organization. A recipe:

Attributes can be configured in cookbooks (attribute files and recipes), roles, and environments. In addition, Ohai collects attribute data about each node at the start of a Chef Infra Client run. See Attributes for more information about how all of these attributes fit together.

Attributes are always applied by Chef Infra Client in the following order:

where the last attribute in the list is the one that is applied to the node. 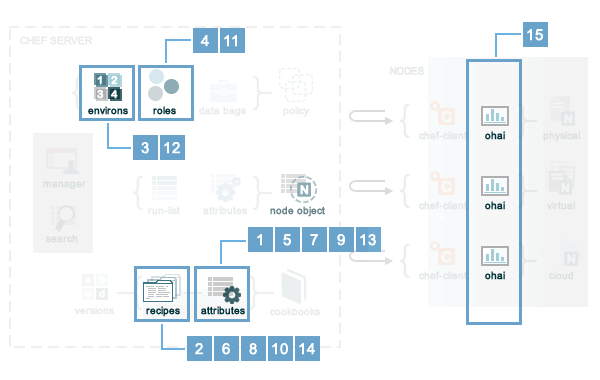 Attribute precedence, when viewed as a table: 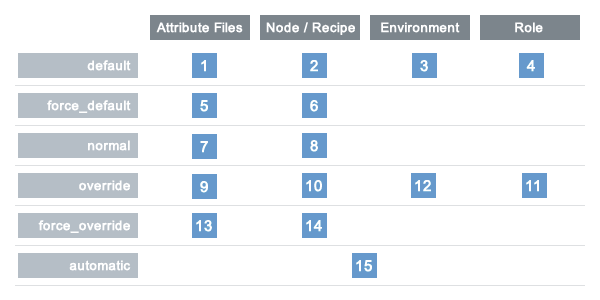 Attributes that should not be saved by a node may be blacklisted in the client.rb file. The blacklist is a Hash of keys that specify each attribute to be filtered out.

The recommended practice is to use only automatic_attribute_blacklist for blacklisting attributes. This is primarily because automatic attributes generate the most data, but also that normal, default, and override attributes are typically much more important attributes and are more likely to cause issues if they are blacklisted incorrectly.

To blacklist the filesystem attributes and allow the other attributes to be saved, update the client.rb file:

When a blacklist is defined, any attribute of that type that is not specified in that attribute blacklist will be saved. So based on the previous blacklist for automatic attributes, the filesystem and map - autohome attributes will not be saved, but the network attributes will.

For attributes that contain slashes (/) within the attribute value, such as the filesystem attribute '/dev/diskos2', use an array. For example:

Attributes that should be saved by a node may be whitelisted in the client.rb file. The whitelist is a hash of keys that specifies each attribute to be saved.

The recommended practice is to only use automatic_attribute_whitelist to whitelist attributes. This is primarily because automatic attributes generate the most data, but also that normal, default, and override attributes are typically much more important attributes and are more likely to cause issues if they are whitelisted incorrectly.

To whitelist the network attributes and prevent the other attributes from being saved, update the client.rb file:

Leave the value empty to prevent all attributes of that attribute type from being saved:

For attributes that contain slashes (/) within the attribute value, such as the filesystem attribute '/dev/diskos2', use an array. For example:

Use the following methods within the attributes file for a cookbook or within a recipe. These methods correspond to the attribute type of the same name:

In UNIX, a process environment is a set of key-value pairs made available to a process. Programs expect their environment to contain information required for the program to run. The details of how these key-value pairs are accessed depends on the API of the language being used.

If processes is started by using the execute or script resources (or any of the resources based on those two resources, such as bash), use the environment attribute to alter the environment that will be passed to the process.

The only environment being altered is the one being passed to the child process that is started by the bash resource. This will not affect the Chef Infra Client environment or any child processes.

The following sections show approaches to working with recipes.

Data bags store global variables as JSON data. Data bags are indexed for searching and can be loaded by a cookbook or accessed during a search.

The contents of a data bag can be loaded into a recipe. For example, a data bag named apps and a data bag item named my_app:

The data bag item’s keys and values can be accessed with a Hash:

Encrypting a data bag item requires a secret key. A secret key can be created in any number of ways. For example, OpenSSL can be used to generate a random number, which can then be used as the secret key:

where encrypted_data_bag_secret is the name of the file which will contain the secret key. For example, to create a secret key named “my_secret_key”:

The tr command eliminates any trailing line feeds. Doing so avoids key corruption when transferring the file between platforms with different line endings.

An encryption key can also be stored in an alternate file on the nodes that need it and specify the path location to the file inside an attribute; however, EncryptedDataBagItem.load expects to see the actual secret as the third argument, rather than a path to the secret file. In this case, you can use EncryptedDataBagItem.load_secret to slurp the secret file contents and then pass them:

If a cookbook has a dependency on a recipe that is located in another cookbook, that dependency must be declared in the metadata.rb file for that cookbook using the depends keyword.

Declaring cookbook dependencies is not required with chef-solo.

For example, if the following recipe is included in a cookbook named my_app:

Then the metadata.rb file for that cookbook would have:

A recipe can include one (or more) recipes from cookbooks by using the include_recipe method. When a recipe is included, the resources found in that recipe will be inserted (in the same exact order) at the point where the include_recipe keyword is located.

The syntax for including a recipe is like this:

Multiple recipes can be included within a recipe. For example:

If a specific recipe is included more than once with the include_recipe method or elsewhere in the run_list directly, only the first instance is processed and subsequent inclusions are ignored.

Attributes sometimes depend on actions taken from within recipes, so it may be necessary to reload a given attribute from within a recipe. For example:

Anything that can be done with Ruby can be used within a recipe, such as expressions (if, unless, etc.), case statements, loop statements, arrays, hashes, and variables. In Ruby, the conditionals nil and false are false; every other conditional is true.

A variable uses an equals sign (=) to assign a value.

To assign a value to a variable:

A case statement can be used to compare an expression, and then execute the code that matches.

To select a package name based on platform:

An if expression can be used to check for conditions (true or false).

To check for condition only for Debian and Ubuntu platforms:

To use an expression to execute when a condition returns a false value:

A loop statement is used to execute a block of code one (or more) times. A loop statement is created when .each is added to an expression that defines an array or a hash. An array is an integer-indexed collection of objects. Each element in an array can be associated with and referred to by an index.

To loop over an array of package names by platform:

A hash is a collection of key-value pairs. Indexing for a hash is done using arbitrary keys of any object (as opposed to the indexing done by an array). The syntax for a hash is: key => "value".

To loop over a hash of gem package names:

There are two recipes: a default recipe (that has the same name as the cookbook) and a recipe named mod_ssl. The syntax that applies a recipe to a run-list is similar to:

where ::default_recipe is implied (and does not need to be specified). On a node, these recipes can be assigned to a node’s run-list similar to:

Use knife to add a recipe to the run-list for a node. For example:

More than one recipe can be added:

which creates a run-list similar to:

Use a JSON file to pass run-list details to chef-solo as long as the cookbook in which the recipe is located is available to the system on which chef-solo is running. For example, a file named dna.json contains the following details:

To add the run-list to the node, enter the following:

The results of a search query can be loaded into a recipe. For example, a very simple search query (in a recipe) might look like this:

A search query can be assigned to variables and then used elsewhere in a recipe. For example, to search for all nodes that have a role assignment named webserver, and then render a template which includes those role assignments:

A tag is a custom description that is applied to a node. A tag, once applied, can be helpful when managing nodes using knife or when building recipes by providing alternate methods of grouping similar types of information.

Tags can be added and removed. Machines can be checked to see if they already have a specific tag. To use tags in your recipe simply add the following:

To test if a machine is tagged, add the following:

to return true or false. tagged? can also use an array as an argument.

To remove a tag:

The return keyword can be used to stop processing a recipe based on a condition, but continue processing a Chef Infra Client run. For example:

where platform?('windows') is the condition set on the return keyword. When the condition is met, stop processing the recipe. This approach is useful when there is no need to continue processing, such as when a package cannot be installed. In this situation, it’s OK for a recipe to stop processing.

You may also see code that uses the fail keyword, which behaves the same but is discouraged and will result in Cookstyle warnings.

Use these keywords in a recipe—but outside of any resource blocks—to trigger an unhandled exception during the compile phase. For example:

where platform?('windows') is the condition that will trigger the unhandled exception.

Use these keywords in the ruby_block resource to trigger an unhandled exception during the execute phase. For example:

Use these keywords in a class. For example:

and then later on:

Since recipes are written in Ruby, they can be written to attempt to handle error conditions using the rescue block.

where data_bag_item makes an HTTP request to the Chef Infra Server to get a data bag item named flowers. If there is a problem, the request will return a Net::HTTPClientException. The rescue block can be used to try to retry or otherwise handle the situation. If the rescue block is unable to handle the situation, then the raise keyword is used to specify the message to be raised.

When this recipe runs, Chef Infra Client will print something like the following: